Are Cats Causing A Decline In The Bird Population?

The hunting activities of the domestic cat have long been a cause of argument and distress. Even cat owners do not generally enjoy their regular gifts of corpses not to mention bird loving and fish keeping neighbours who can find the presence of a feline resident very distressing. Bird lovers have argued vigorously that feline intervention is a cause of declining bird populations but until now there has been no scientific evidence of exactly how many animals our cats actually kill. 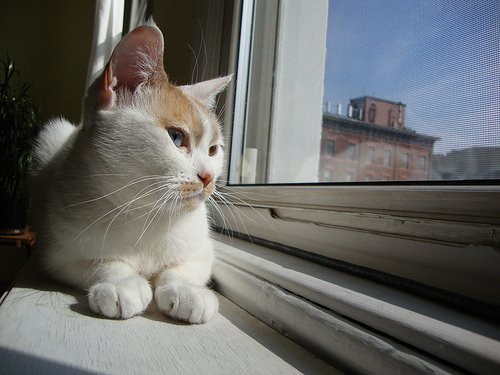 A survey of cat owning households would quickly reveal the number of corpses delivered to their doors each year but such figures would not take account of the prey claimed by cats which are not brought home. Estimates on what the numbers might be vary significantly but the most recent figures from the Mammal Society suggest that the numbers which are known to have been caught are as high as 275 million with 55 million being birds.

Despite the enormity of the numbers there is no evidence that the activity is having a detrimental effect on bird populations. Millions of birds die every year from starvation, disease and predation by non-domestic animals and cats often take weak specimens which would have died anyway if left in the wild. In fact most baby birds die well before they reach breeding age as nature dictates that each breeding pair need only produce two young which survive to maturity in order to maintain the population. In addition, of the species most often taken by cats only sparrows and starlings have shown a decline, the others like, blue tits, are on the increase. The bird species which have undergone the most serious decline like skylarks and corn buntings rarely encounter cats at all. There are, however, some species which whilst not subject to recent decline, were already under pressure and a reduction in cat predation may help to induce a welcome increase in the populations of these birds which include greenfinches, song thrushes and blackbirds.

Whilst the idea that cats are seriously depleting bird numbers is questionable at best the fact remains that no one knows precisely to what extent they are killing them. We have some idea of how many kills are brought home but not how many more there are. A new scientific study aims to answer that question. The research involves the use of “cat cameras” to record the activity of our feline friends whilst they are out of sight. The use of small mounted cameras such as helmet cams is now commonplace amongst cyclists and sports enthusiasts but the technology is now being used to track the activity of our pets. The cameras used in the study, which is being conducted by the University of Reading, are much smaller devices than a helmet cam and weigh only 80 grams. The cats will be monitored with and without the cameras to determine whether the devices impede their hunting activities. The project will run until October and hopes to finally solve the mystery of cat predation. A broader study will follow if this project proves to be a success.

It appears that we may soon know to what extent cats are affecting bird populations. If the study reveals that they are having a negative impact then the next issue is what to do about it. Knowing the general propensity of cats to do exactly as they wish this could be a hard nut to crack!

This interesting guest article was contributed by Sally Stacey on behalf of Vision MX, an online retailer who sell a great deal of GoPro Helmet Cameras which are perfect for attaching to your cat or dog's collar.